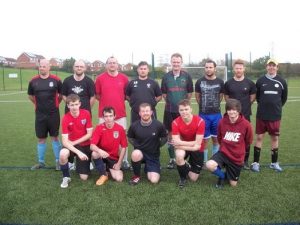 Chamberlin PLC held its first inter-site Six Aside Competition. The competition was hosted at Leicester, and involved a number of teams from the Chamberlin businesses. Russell Ductile Castings entered two teams, Walsall Foundry entered two teams, Leicester foundry entered one team and a team representing the PLC took part. Following a round robin competition where each team played each other, a semi final round then took place. The saw the two Russell Ductile teams play each other and the two Walsall teams also play each other. The final ended 0-0, and Russell Ductile came out victors in a nail biting penalty shoot out. Aswell as winning the competition, the winning Russell Ductile team also had one of its players awarded Player of the Tournament, who was Rob Bedford (seen wearing the maroon Nike top).